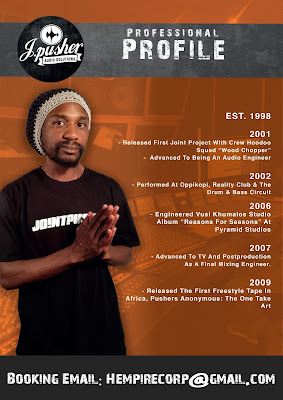 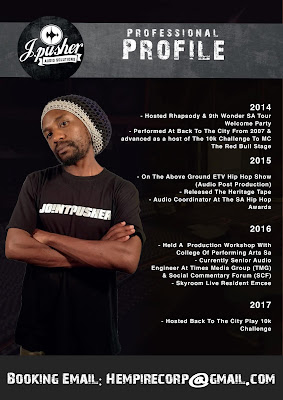 Non sponsored events from: 2k (without band).
From: 5k (with band) 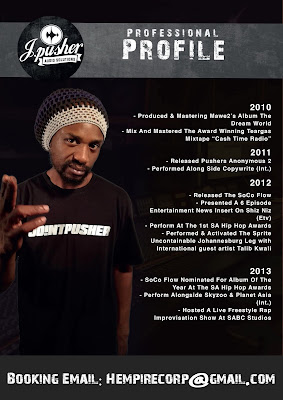 Posted by The Hempire Media at 03:40 No comments: 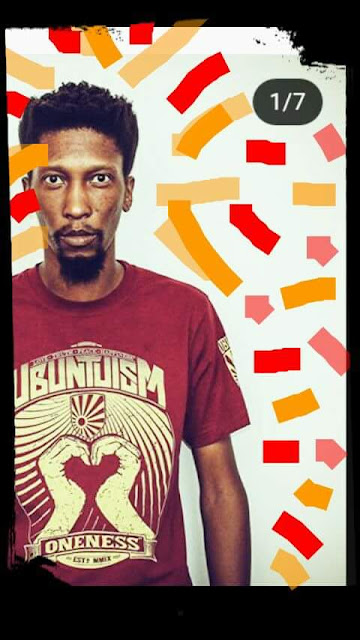 Hailing from a township that was home to South Africa's 1st Black Boxing Heavyweight Champion of the World - Mohlakeng, a small township in the outskirts of the west of JHB.

L7 Sativa is what he describes as a "RAPtVst" and is considered one of Africa's emerging  superstars with revolutionary Hip Hop music (RAP) & is also the most streamed artist from Joburg west. 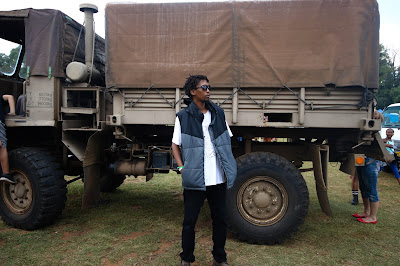 Besides giving lectures and talks on HipHop as an indigenous knowledge system (IKS) at UNISA, V as he is also known can be found at protests and peaceful marches expanding consciousness with what he describes as "cRhyme" around the country and is also endorsed by the DJ Sbu owned "MoFaya" energy drink from February 2020 and ACTVST Clothing Supply Group. 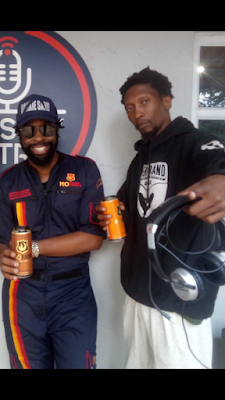 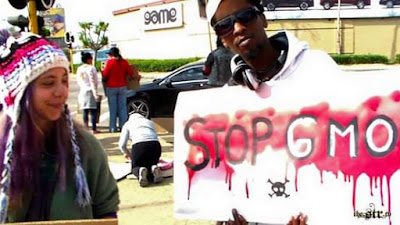 ×RAPtVst×
2013 Sprite Uncontainable Emcee Search Finalist, L7 has two EPs out and is getting ready to deliver a third one from a planned series of 7 EPs and also has a series of mixtape compilations titled "The Str TV" with the 4th tape scheduled for release in 2020. 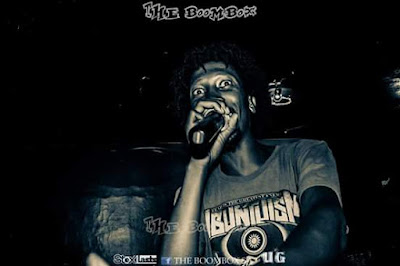 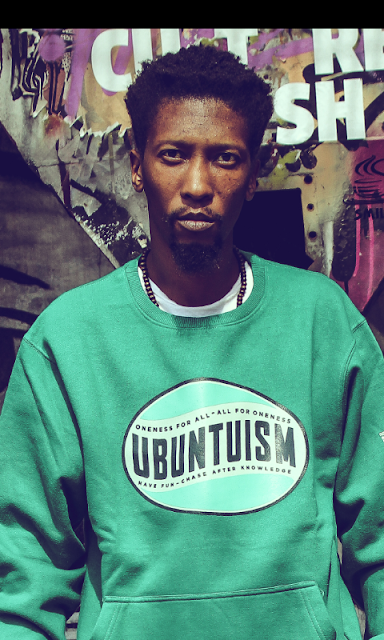 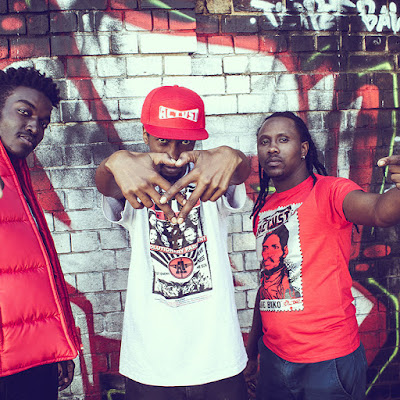 ×HipHop Performer×
Billed as one of the headlining acts at the inaugural Tanzania HipHop Conference happening October 2019, L7 and all other international acts were cancelled due to high tensions with South Africa due to media reports of xenepohobia...

Predominantly a HipHop emcee, L7 has gone on share stages with names from across the musical spectrum like the likes of Poet Ntate "Don Mattera" and Professor "Pitika Ntuli", the late "Ben Sharpa", POP stars like "Cassper Nyovest" and international stars like Rapsody, 9th Wonder, Apollo Brown, Pharoahe Monch & more. 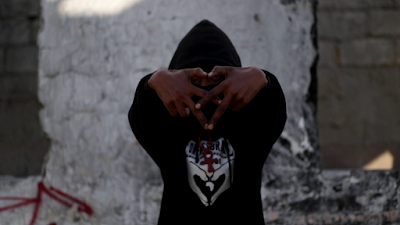 Non sponsored events (Negotiable):
From 2k (without band).
From: 5k (with band)

Posted by The Hempire Media at 03:45 No comments:

"Kela Griot Maswabi" is a scribe, lover of humanity and an evolving creative, finding expression in poetry, prose, playwrighting and just about anywhere else where ink marks the spot .
Voice of Cell C`s "Black", Inaugural Winner of the Canadian International CASA Play right competition and 2017 headliner at the annual Cape Town festival "Poetry in Mcgregor", she set off the year 2018 in style delivering the BET Human Rights Poem that aired on South Africa's Human Rights Day across Africa.

View the video below


Kela Griot's work has been published on Badilisha, Sibahle Online Magazine, Black On White, the acclaimed Conte Magazine #AfrikaIssue, Poetry Potion 10th Edition and the Sol Plaatjie European Union Poetry Anthology for which she was longlisted. Her love for all things Afrikan led to her collaboration with musicians Luckey Mhebe and Duduzile Uthingo Majola. The experience was so beautiful that the trio formed a band "Asante" which fused Uthingo's signature Makhoyana and Mbira playing with Luckey's vocals and wizardry on keys with Kela Griot's moving story telling. Asante was the resident songoma band at Kisima's Health and Healing cafe. 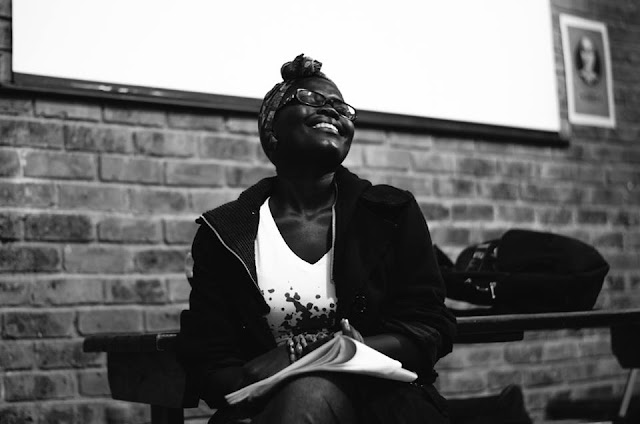 Art exists to fuel activism and this is what led to her to a moving collaboration with indigenous instrumentalist Farai Machingambi closing off the the Seed Dialogue by the African Centre for Biodeversity that was held at Constitution Hill in December 2017. "Without protecting that which sustains life, we are as good as inanimate. So there is no point really if what I create doesn't generate, protect or support life." Kela Griot states.


Described by Prof. Pitika Ntuli as "raw power" Kela Griot uses vivid imagery, childlike honesty and deep reflection to weave together stories. She describes herself as a deep empath and suspects that is why she is a medium for #heART. She hopes to help humanity art itself back to love, one poem and outlandish creative disruption at a time."

Non sponsored events from: 2k (without band)
From: 5k (with band) 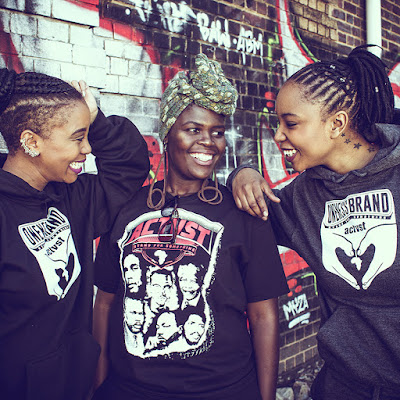 Posted by The Hempire Media at 06:41 No comments: 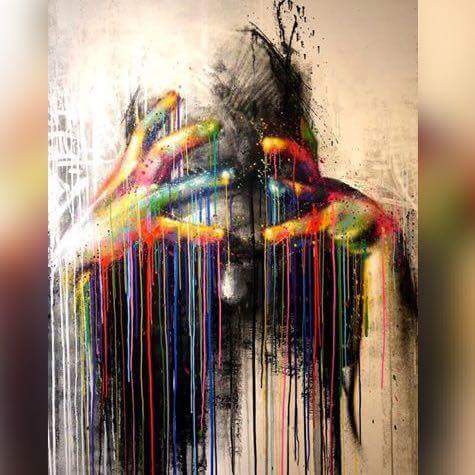 Brotherhood Of The Mic #BOTM

Brotherhood Of The Mic

Hailing from "Mohlakeng" in the West of Johannesburg dubbed MQbik by its HipHop community,
BOTM (Pic3) as they are also known were founded in '09 by "@L7_sativa" with "@obsqo" - (Graphic Designer / BeatBoxer) later joined by Producer Sta-B of "@SkyKlinic" & Graffiti Artist "Nhlanhla SA" as an ancestral academy for the HeArtically gifted and use a "Revolutionary Black conscious critical thinking & socio-political approach to their music (see pic2)!

(Pic2) official artwork for one of the singles "Runnin Away"

Having been on the road since '12 hitting shows with loose singles, they realised the positive feedback from rocking the stage and have since '13 gone on to record, perform alongside acts such as "SCF", "Ben Sharpa", "Articulate Artists", "Prokid", "L-Tido" and promote singles from their debut Album "le Resistance". 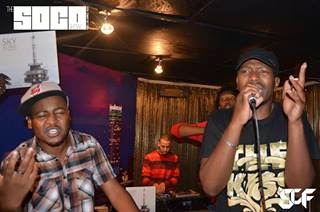 Bookings: Hempirecorp@gmail.com
Posted by The Hempire Media at 03:05 No comments:


Thato Montsho, formally known as Jalettua Nuune is a singer-song writer, rapper, designer, creative, entrepreneur and vocalist. Her life as an artist began at a young age. Singing and drawing have always been her strong points. She began writing and performing in 2008 of which she went by the name Inceinati. . Performing at Open Mic Sessions, and by 2010 she went into slam poetry, which then allowed her to evolve into a singer. 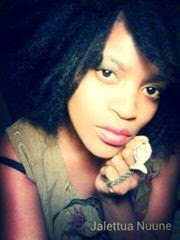 In 2012, she was a back-up singer for Suzan Rhubaab, who was then known as Elyza B. Jayne, briefly worked with The Ban'kok, before being advised to be an artist on her own. Her presence and energies have been felt at places such as Ballissimo, The E.B.J Show, Ko'Spotong, The Ban'kok Sessions, Juiced Poetry Sessions, Phenomenal Women Women's Conference and The BoomBox in Johannesburg, Fochville and the West Rand amongst other places.

Jalettua has had the privilege of working and collaborating with a number of beat makers and talented artists. They have helped and contributed to the constant evolving state of her sound: her first single was released on Sound Cloud on September 3rd 2014.

The songs and designs that she makes are usually a reflection of experiences. Consciously writing about her own trials, experiences, as well as observations, telling stories and painting pictures through her work has been her excelling point. Proudly noted as a cross-genre artist, the "foundation" of her work is Hip Hop as it allows one to reflect. Honest and open with her spirituality and how it feels, each song reflects a character and with each track you will be able to hear something different: A bit of Soul, RnB, Jazz, Old Skool flavors, Underground, Dub and indie, making interesting fusions of sound. Open-minded and free-spirited, this allows Jalettua's sound to explore yet remain consistent. There is a lot of flow, play and relevence in her music, this allows this energetic and lively artist, as well as her audience, some form of platform to express and say things that are mostly felt but seldom said. She believes and constantly states that pictures, stories, situations and thoughts; when put into words, and if willing, allow one to go into that imagination and into that moment. She simply shares my opinions. 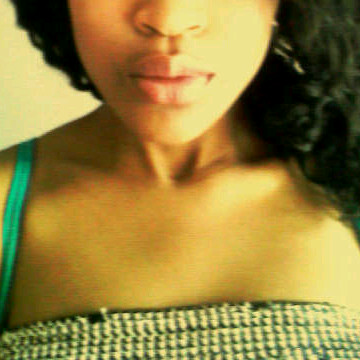 Booking: Hempirecorp@gmail.com
Posted by The Hempire Media at 03:45 No comments: